The Tainos and the Mayas 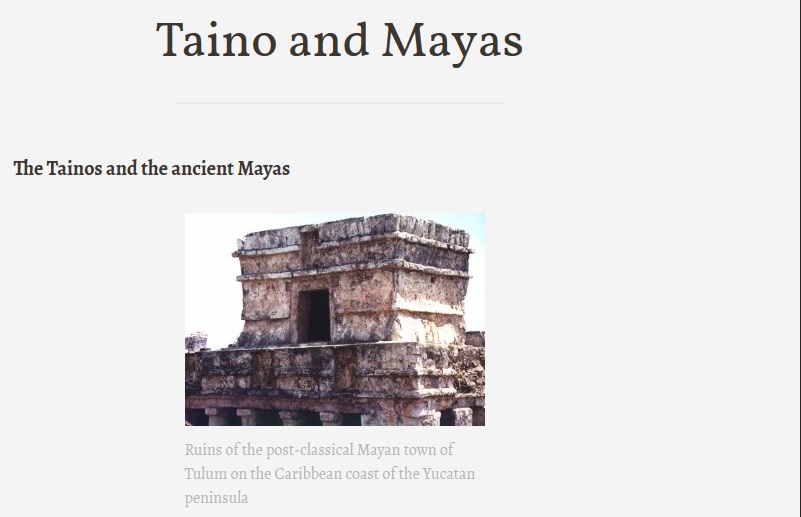 The original ancient inhabitants of the Caribbean islands which lie not too far from the mainland Maya region of Central America were a nation of simple farmers and hunters known as the TAINOS.

The Taino People arrived in the Caribbean several thousand years ago. Our ancient ancestral homeland is the South American headwaters of the Orinoco river,  the northern coasts, rain forests and the plains of Guyana and Venezuela where our ethnic relatives, the modern Arawak people still live. Our ancestors brought with them the core of that South American forest culture. It tenaciously clung to them in the intonation of their Arawak dialects, the agricultural tradition of yuca cultivation and the manufacture of Casava bread, the style of their pottery.

Our people also brought with them an advanced canoe-building technology. It allowed them to negotiate the treacherous straights between the islands of the Caribbean as they made their way northwest colonizing  them one by one.
Once the area of the large islands was reached and colonized our ancestors came under the influence of an ancient and majestic culture that emanated from Mexico and the Central American mainland. Many of the traditions of this culture were new and strange to our ancestors but, although it took a long time, their ways were inexorably changed and enriched by it.
Our ancestors learned to eat maize and chili peppers from these technologically advanced new neighbors. And the Central American neighbors learned to eat yuca from the strange South American newcomers. The cultures of the two peoples remained fundamentally distinct and different but after this encounter each one was enhanced by its contact with the other.
The people of this Mesoamerican region who influenced the ancient Tainos most profoundly were the Mayas of the Yucatan penninsula southeast of Mexico. Maya culture was extremely advanced and they reached a level of spiritual understanding that our Taino ancestors understood was thoroughly enlightened. The Taino ancestors realized that the wisdom of the Mayas was in harmony with the equally profound spirituality that they themselves possessed and so the two people traded and adopted aspects of each other's spirituality and mystical belief just like they did with foods and other cultural exchange. Evidence of Taino cultural characteristics which were obviously borrowed from the Mayas include the well-documented head-elongation custom, use of litters to carry head chiefs, hirearchic stratification of society uncharacteristic to the ancestral South American Arawaks, the Taino ball game of Batey which closely parallels the Maya ball game of Pok a Pok, and much more.
Modern archeologists are beginning to recognize that the interchange of ideas and culture between the Mayas and the Tainos was more extensive than was previously suspected by them.
We in the Caney have always been aware of the intimate connections between the spirituality of the Tainos and the Mayas. Since the 1960's Beike Bo Sobaoko Koromo was inspired by his father to develop a deep respect and admiration for the wisdom of the Mayas, their spiritual mathematics, their magical calendar and their enlightened astronomy. This happened as a result of the fact that it became apparent that a number of Maya indians were kidnapped by the Spanish conquistadores from Yucatan during the grim era of the conquest and were brought as slaves to Cuba. The blood and ethnicity of these Mayas became mixed with that of some of the Tainos that lived in Oriente province where Beike Sobakoko was born. Some of his ancestors are actually Yucatecan Mayas.
Beike Bo Sobaoko Koromo was initiated as a Maya calendar daykeeper in the mid 1990's and conducts workshops and seminars on the profound message of the Mayan calendar.
The Caney Indigenous Spiritual Circle is based in part on the principles established long ago by the spiritual relationship between the ancient Taino people and the ancient Maya people. Our guiding ethos is a concept known as the 24 GENERATION PROPHECY an oracular construct that outlines, from a Taino perspective, the general theory of the Maya Calendar World Age philosophy.